What Is Counselling About? From A Block Of Marble To A Timeless Statue - Inspiration For Believing In Yourself... 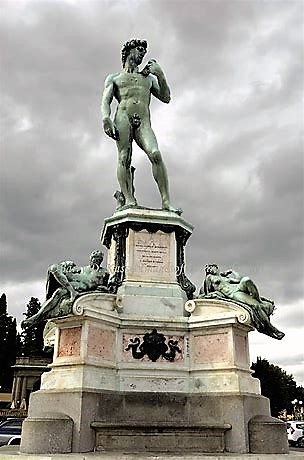 What Is Counselling About? From A Block Of Marble To A Timeless Statue - Inspiration For Believing In Yourself...

Years later a visiting prince came into Michelangelo's studio and found the master staring at a single 18 foot block of marble. Then he knew that the rumours were true — that Michelangelo had come in everyday for the last four months, stared at the marble, and gone home for his supper. So the prince asked the obvious — "what are you doing?" And Michelangelo turned around and looked at him, and whispered, to Lavorando, "I'm working". Three years later that block of marble was the statue of David

This story is referenced in the television series 'Lost' where one of the characters asks another why they are spending their time constantly staring at a hatch door in the ground that has no handle, no button, no signs or no obvious way of opening it....just a door. The reply is the above story of Michelangelo and how he stared at a block of marble for four months, seemingly without reason, until one day he eventually created the statue of David from it. Although he was stood still, his mind was working out the steps that were needed to bring his vision of beauty alive through sculpture.

The reason this story was used in the Lost episode was to highlight the search for a deeper purpose behind something, (the hatch door in this case), and whilst it can be easy to judge things based on what is seen on the outside, there is always more going on behind the scenes, as well as more potential to be brought out from it. (Check out the video below to watch the actual scene in 'Lost', just remember to come back!)

This story about Michaelangelo and his father is significant, because behind everything there is always more information and potential to be discovered in order to bring out it's best, which is often overlooked or missed in the course of life's (sometimes difficult) journey. To give you an example, the actual statue of David that Michaelangelo created still stands today from when it was first created between 1501 and 1504, and the block of marble that Michaelamgelo used, the one he stood looking at, was left abandoned by other sculptors at the time because they thought it was useless and had too many imperfections. Michaelangelo, rather than seeing the 'imperfections' had the sensitivity and vision to see beyond what it was, to see the potential of what it could become. He used this to bring out the best in the marble block, therefore creating the timeless statue.

Imagine if Michaelangelo had listened to his father's disapproval to follow his passions and given up on his art, (because artists back in those days where seen as people who didn't have as higher social standing as some more higher class work positions, such as banking, like his father did), then the world would be missing some amazing pieces of work that have touched people's hearts and souls. His father maybe didn't mean to knock his son's confidence intentionally, but he couldn't see what his son was seeing from his perspective, because he was coming from his own ideals and perspectives, which saw art as not being a good career move at the time.

Sylvester Stallone (Sly), the actor, writer and movie producer is another example, from being a very sensitive and shy person, who had many knockbacks on his way to success too. A difficult birth meant that he was left with paralysis of his lower left face, including his lip, tongue and chin. This is the reason he slurs some of his words and was also a cause for him being bullied at school. On the outset there have been many people who've judged him based on his appearance and the way he talks, but underneath it all he is a very intelligent person with an I.Q. Of 165, which is classed as genius level (even Einstein was I.Q.160!). He has accrued over $4 billion for the movie studios in his career through his acting, directing or writing.

Stallone once said in an interview that movie producers would repeatedly tell him that he didnt have the right look for acting, he should stick to writing instead and he should give up on it. Nevertheless, he wouldn't give up on himself or his vision to become an actor, and so he carried on trying to get a foot in the door with a story he had just written about a down and out boxer, who gets an oppertunity title shot, and surprisingly turns it around. This was the basis of the highly successful Rocky films, which he eventually starred in.

The potential and the vision was inside Sylvester Stallone and it could be said that the knockbacks brought this out in him even more stronger, similarly to Michaelangelo with his dad, but like Sylvester Stallone pointed out on another interview, it could have easily gone the other way and through the unpleasantness of the knockbacks, he may have eventually been forced to quit his dream. He made reference to other types of artists on that journey too in music, painting, acting, singing who are also sensitive people with talent, but due to knockbacks would most likely be put off by the criticism and negativity of other people and their talents would be unexpressed into the world as a result.

How many times can we honestly say that we have experienced both of these perspectives from judging what seems to be 'imperfect' or broken in something, or someone, when there has been greater potential that we have overlooked, or when other people have looked at us as broken or imperfect, or maybe we have viewed ourselves like this, and our own potential has been overlooked?

How does all this relate to counselling and what the bloody hell am I going on about?

One question I get asked a lot when first working with someone is, "what is counselling about and how does it work?" This is especially true if someone enters counselling because they have been pushed to do it by someone else (e.g. "if you don't go to counselling and sort out your life, then you are out of this house and sleeping in the car forever!").

The truth is that everyone has the potential to be their own Michaelangelo and bring out a deeper potential within, that is based on strength, beauty and spirit, which is at the core of everyone. This can be used to get past problems or challenges, either big or small, or help to make a dream come to life (maybe to paint another part of the Sistene Chapel ceiling that Michaleangelo has left out?). The problem is that life can be challenging and sometimes we face negativities or challenges from situations, from other people, and even from our own negative thoughts which can cause a distraction or disconnection from the inner strength we naturally have. This is where counselling comes in...

All too often, someone's confidence can be knocked or they have suffered something traumatic or difficult to cope with. The journey to get back to a good place or find peace, whatever that might mean for somebody, can be overwhelming, and this is when counselling can help. A counsellor will believe in the beauty and strength within everyone and will never give up on them, which is why it can be so powerful and transformative, when the process fully happens. It doesn't necessarily mean that everyone wants to paint the Sistine Chapel ceiling, like Michaelangelo, or become a movie star like Sly Stallone (or they might do?), but maybe just discovering that a bump in the road, doesn't mean it's the end of the road, and knockbacks, whilst unpleasant or demoralising, are the things that strengthen people to new life and oppertunities.

Most of counselling is believing in and seeing the beauty within each person and not judging based on first impressions of an issue - because  there is always deeper reasons behind it and something beautiful that is beneath it all - in counselling this can be brought out through the discovery process.

Is counselling for everyone, or do people need a counsellor to find strength? Nobody needs anything other than their own sense of self-discovery to recognise their strengths, but even this can be overlooked when life, problems, stress, fear, anxiety or depression becomes a focus instead. Like any journey though it is natural that some parts are not as clear as others, or may get too dark to see the way ahead, and this is when a good counsellor can support someone through it. There is also a part in everyone that can be inclined to see love as either conditional, or unconditional, partly due to how we develop through age, and partly from how we perceive our parent's love for us. This can cause self-doubt, or self-awareness depending on our personality and outlook, but this is another story for another day!

When you believe in yourself and rise above the negativity, you can create your own masterpieces, or at least live a happier life, that would otherwise be distracted from, when you are not believing in yourself.

Life is full of problems, life can be tough, life can be upsetting, but life can also be beautiful too, and sometimes we all need a reminder of how strong and beautiful we all are...We are NOT the problems in life, we are a part of them and caught up in them, this is a big difference!

If you are in a place that needs a reminder, or have any other obstacle blocking your way to happiness, then contact us by clicking here, and tell us about it.

Hope you have enjoyed this article!

Resilience Counselling is a counselling, therapeutic and training service to empower people from all walks of life who are having difficulty or in need of some support.